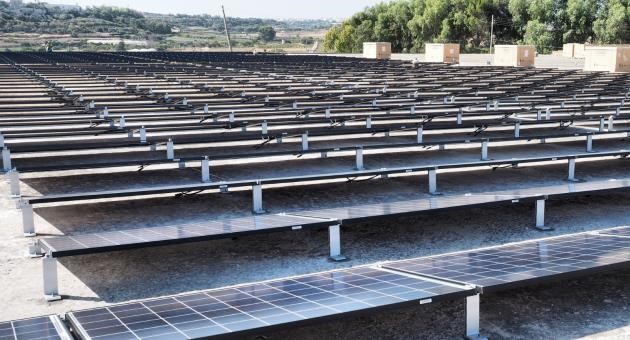 Proposed solar farm in Mgarr quarry would have over 17,000 solar panels

Proposed solar farm in Mgarr quarry would have over 17,000 solar panels

An application has been filed to create a large solar farm in a quarry in Mgarr would contain 17,688 solar panels, plans show.

The total site area of the quarry stands at 76,800 square metres, and is just off Triq l-Imgarr.

Documents submitted to the Planning authority highlight that the application is to install a solar plant in line and full compliance with the Planning Authority Solar Farm Policy.

“This project will generate nearly 8,480,000 kWhrs of renewable electricity and displace approximately 5,681 tons of CO₂ and is a valuable part of Malta’s obligations to reach its EU 2020 renewable energy targets.”

The services which are essential to the solar farm will all be underground in suitable protective ducting and will not be visible. All materials which will be placed on site are 100% recyclable, removable and reusable. The use of aluminium for the support structure allows for a recycling value which appreciates over time. This also gives value to the plant after its useful life thus creating a financial incentive to dismantle the plant.

The PV modules are also part of a recyclable scheme. No construction or demolition waste will be generated by this project and no light pollution will be emitted as the project will only operate during the day. Any maintenance works can only be carried out during the day. We can safely state that the site will be 100% restored to its original (pre-project) state after the lifetime of the solar farm.

An Environment Impact Assessment screening procedure had been undertaken by the Environment and Resources Authority (ERA). The ERA said that the project will be highly visible by many people, and may have an impact on the visual amenity and landscape of the area, given the rural nature of the site. However, such an impact is unlikely to be significant relative to the current baseline which is dominated by the prominent landfill.

The detailed EIA screening concludes that impacts of the development are unlikely to be significant to the point of warranting an EIA, in accordance with EIA Regulations, as long as various mitigation measures are duly incorporated into the mainstream development consent mechanism.